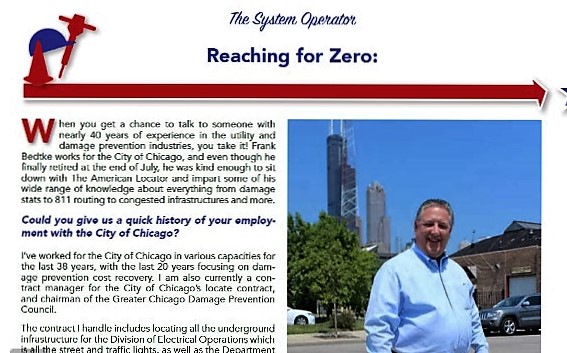 An Interview with Frank Bedtke

Excerpt from an upcoming issue of The American Locator:

When you get a chance to talk to someone with nearly 40 years of experience in the utility and
damage prevention industries, you take it! Frank Bedtke works for the City of Chicago, and even though he finally retired at the end of July, he was kind enough to sit down with The American Locator and impart some of his wide range of knowledge about everything from damage
stats to 811 routing to congested infrastructures and more.

Could you give us a quick history of your employmentwith the City of Chicago?
I’ve worked for the City of Chicago in various capacities for the last 38 years, with the last 20 years focusing on damage prevention cost recovery. I am also currently a contract manager for the City of Chicago’s locate contract, and chairman of the Greater Chicago Damage Prevention
Council. The contract I handle includes locating all the underground infrastructure for the Division of Electrical Operations which is all the street and traffic lights, as well as the Department of Water Management and all of O’Hare Airport.

Could you give us a short overview on DIGGER, the one-call system in Chicago?
The DIGGER system has been around since the mid-1970s, and has always had a simple software system but was recently updated on December 7th, 2015 to a user-friendlier version. It’s been entirely restructured to better handle ticket volume, and improves the range that you can actually put on a ticket. It’s there to protect the underground infrastructure and all the utilities within the Chicago city limits.

Check out more here in the current preview version of The American Locator!