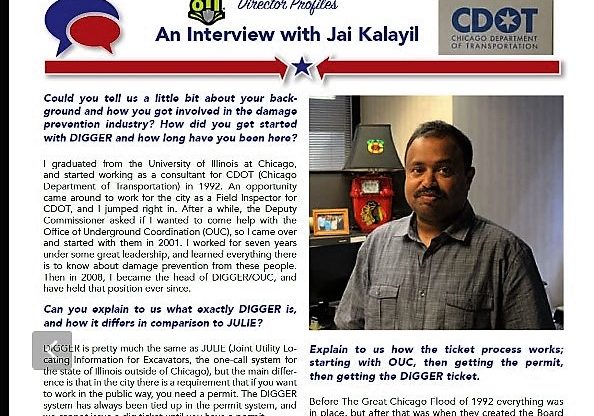 An Interview with Jai Kalayil

Excerpt from an upcoming issue of The American Locator:

Could you tell us a little bit about your background and how you got involved in the damage
prevention industry? How did you get started with DIGGER and how long have you been here?
I graduated from the University of Illinois at Chicago, and started working as a consultant for CDOT (Chicago Department of Transportation) in 1992. An opportunity came around to work for the city as a Field Inspector for CDOT, and I jumped right in. After a while, the Deputy Commissioner asked if I wanted to come help with the Office of Underground Coordination (OUC), so I came over and started with them in 2001. I worked for seven years under some great leadership, and learned everything there is to know about damage prevention from these people. Then in 2008, I became the head of DIGGER/OUC, and have held that position ever since.

Can you explain to us what exactly DIGGER is, and how it differs in comparison to JULIE?
DIGGER is pretty much the same as JULIE (Joint Utility Locating Information for Excavators, the one-call system for the state of Illinois outside of Chicago), but the main difference is that in the city there is a requirement that if you want to work in the public way, you need a permit. The DIGGER system has always been tied up in the permit system, and we cannot issue a dig ticket until you have a permit. We follow the state’s one-call law just like JULIE, and try to generally be on the same page as them, so a contractor working in the suburbs won’t be too lost when he works
in the city.

Check out more here in the current preview version of The American Locator.